The second year I've done this. While last year's traditions were oriented around 1) taking a personal inventory and 2) relaxing in the beauty of nature down in Sunnyvale, now that I've moved up to San Francisco, nature yields to indulging in the action of urban life.

6:45, 63˚, shivering in delight. The horizon is a yellow promise through a veil of rooftop plants. Everything is asleep except me, the elevator, and the birds winging overhead.

Create a piece of art.

I inflicted typography on a page of Chloe's hilarious quotes that I've written down over the years. When she's not concerned about what other people might think, she says really crazy things. Too bad it's private; you can never know the depths of her mind except by marrying her, I guess, and I beat you to it.

9.9 lbs lighter than this time last year. I was slightly trying to slim down instead of last year where I was trying moderately to bulk up. Lost 3.1 lbs of fat and 6.8 lbs of muscle. Oh well. It's too bad I have to lose strength, but I like being lighter. Once again I look exactly the same despite the ten pound difference.

Instead of taking a walk, I took a long cruise on Alex's electric longboard today: from Bearbox up through the heart of SF to the blood lab, then to a café, then to South Park where I read my book while a Chinese family sat at a picnic table with me--the parents approved of the girlfriend after the young couple left, unaware that I understood them--and then home. I love the electric longboard and can't wait to get my own Boosted board.

Pulling one of my favorites from high school for something beautiful today: If on a Winter's Night a Traveler by Italo Calvino. I read it ten years ago and wondered this morning, could it possibly have been so good?

Yes, yes! It is gorgeous! Thrilling! I love the exuberant, experimental style.

I ordered the same blood tests from last year from DirectLabs.

Results: I have them, but I hate interpreting them, so these are just going to sit here until I find someone who likes researching this stuff.

Skritter iOS app revenues really started kicking off after we dropped the iPad app eleven months ago, so income is up 64% from last year, and net worth is up 66%. Pretty sweet! I've been trying to increase spending, but I'm a bad consumer, except for, now, Ubers and sushi.

(If you're me, you get to see stats here. Since you're not me, you see nothing.)

I started this monthly general cognitive testing battery a year ago to track my long-term cognitive performance. Now I've done thirteen of them, I checked to see if there any significant results. There are a couple, but they don't survive multiple correlation adjustment. This makes sense, as there are only thirteen sessions, and is actually good, because the longer I don't see any changes, the longer I've apparently held off the aging decay of my brain.

Had good conversations with Mom, Dad, and Bro. All is well. 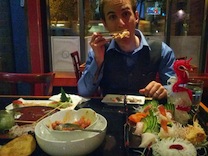 Chloe took me out to super premium omakase sushi at Nama, where I stuffed myself rotten. They busted out the dry ice and sushi bridge and a bunch of other stuff. Mmmm. I ate as much as I could, but there was one raw shrimp left, so we smuggled it home in a napkin and seared it as a delicious joke.

I sat down with my journal and evaluated three areas: what went well, what didn't go well, and how my relationships are now.

Organize my files and computer desktop.

I just archived screenshots, moved code foldes into subdirectories, put some things in Dropbox, deleted other things from Dropbox, put some other things in Hog, and changed my Terminal window group settings. I'll probably mess with this more when I buy a new computer. Soon.

It's time to ruthlessly cull down my end-of-day Google Docs spreadsheet tracking. I'm also going to put things into tabs by year so that each tab doesn't get horribly long.